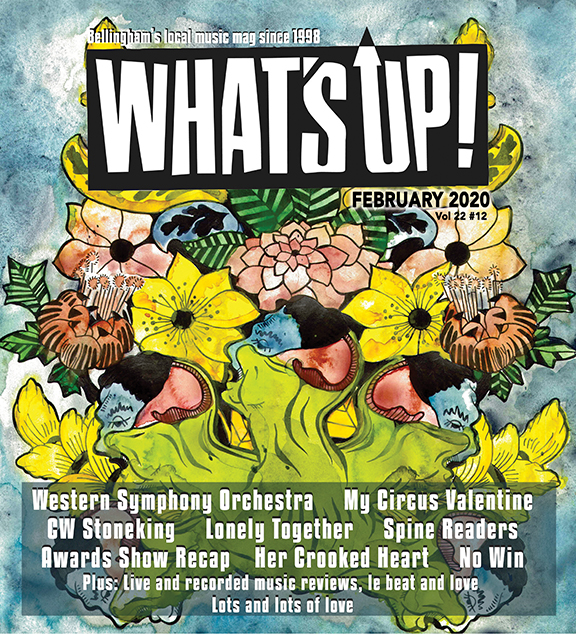 I’ll start with magazine stuff. First, I’d like to thank those who came out to the What’s Up! Awards Show in January at the Wild Buffalo – it was a fun time had by one and all. The music was awesome – a great mixture of what’s happening in Bellingham. Munch, LipStitch, Blood Capsules, The Rhetorician and Dryland all killed it and I loved hearing KLEFTO spin. Also, special thanks to Aireekah Laudert for MCing the whole night and thanks to Jackie Kersten for being our Vanna White. Also, thanks to the presenters, and to those who made it out to pick up their awards – it’s the part of the show that makes me giddy. Thank you, thank you, thank you! You can see pretty pictures by Chris Butcher and David Johnson in the upcoming pages as well as who won the illustrious awards!!

Ex Nihilo have released a two-song tape teaser of their upcoming SHREDDING release on Black Spark out of the UK. You can listen to the songs on bandcamp, of course, but you know you want to buy the tape…. Tapes rule. I’m listening to the goods right now and my face has melted.

Lonely Crowded, which includes Pascal Foley, Sam Kunesh, Adam Perkowski and Mackenzie Sinclair, have released a new record. How is this possible, with Pascal having been hospitalized recently for an extended period of time? I have no idea… but it means Pascal is feeling better and that’s a damn good thing. He’s still battling to get his body to work right, but he’s doing a lot better… and music is coming from it. Find it on bandcamp and enjoy.

Ooof, have you checked out Maneken Hand’s new record, Spaceship Haircuts? They’re a great live band and this record really does them justice. They’ve done something that’s damn difficult – keeping the energy of their live show while making the record more clear and direct. Check them out.

WMD is continuing to produce great music with their new album, Saudade, out Feb. 20. It’ll be the first one released on vinyl, which is a huge step for the project. I love that I consistently say two things: WMD is making fantastic music and WMD is releasing fantastic music.

I’ve heard there are tentative plans for LipStitch to release their debut full length in April or May. I sure hope it’s sooner than later, but there you go… I want this thing OUT so we can all collectively enjoy how wonderful this band is. They played a bunch of the new material during their Awards Show set and it’s glorious – great pop/rock. GREAT pop/rock.

Melancholia have just about wrapped up their upcoming release Agony in the Garden II. When’s it coming out? Not sure… probably the spring. Why should we care? BECAUSE IT WILL BE EPIC.

As I’m writing le beat, I’m listening to Smooth Kiwi… who are recording the second weekend of February. I’ve mentioned it before, but their single “Am I Asleep?” just kills me. So remarkable, so beautiful. They kind of sound like King Black Acid with a little later era Floyd… wonderful, spacey and lots of space in their sound. “Fast Mystery,” their second single, is also amazing – both deserve to be checked out. I can’t wait for their new album, and I’m going to bug the bleep out of them to get it done and out! See them on Feb. 8 at The Firefly opening for The Dawn Bombs and, from Brazil, SESSA!

NIK:11, a local EMD artist who tours and plays around the US a lot but not as much locally, has a new track that’s reached the top 20 Billboard Dance Chart. “Kickback,” also includes Ouiwey Collins, son of the legendary Bootsy Collins. Bootsy, obviously, was in P-funk, which NIK:11 spent some time in (post Bootsy). REALLLY stoked for NIK:11, congratulations!

ON THE ROAD (AGAIN)

Jackie is hitting the road for the miniest of mini tours – they’ll be hitting Portland and Eugene the first weekend of the month, which is something I recommend every band do. I’ve said it for years – tour, tour, tour… I probably say it nearly every le beat, but I mean it. Right now, you might not be able to tour, but you can hit Portland and Eugene and make it back for work or school on Monday. GET TO IT.

You know I love Mostafa… love, love, love Mostafa – great person, great music. I also love that he works his ass offfffff. Example? If I did my math correctly, he’s playing 89 shows in 92 days – the first and last being in Bellingham. Beginning March 6, he’s going to tour the U.S. (AND I’M TALKING ALL OVER THE U.S.), ending June 5 back in town. How is he going to do this? I have absolutely no idea… but if this doesn’t make him insane, he’s going to grow as an artist beyond anything he or anyone can imagine. I’ll be honest, though, this tour does freak me out – hardest I’ve seen before is 59 shows in 60 days (by Federation X)… then again, Mostafa is a one man act (depending on who is touring with him)… so maybe it’s just a nice road trip for him, plus playing music… every single day. No matter, this is amazing and inspirational. Have fun!

THINGS THAT MAKE ME HAPPY

With No-Fi Soul Rebellion coming back to our lives (I’m still so bummed I missed their show), I’ve been enjoying their catalog again. You can check it out on the normal services, but it’s really worth the listen. One of the best, most interesting and joyful bands the town has ever produced.

The Alternative Library has found a temporary home at 1309 Billy Frank Jr.  Street. They don’t have regular hours right now, but are doing shows again, so that’s good news. Not sure how temporary it is, but today it’s going and we should all celebrate that.

So… there’s a show a little off the beaten path that I’m insanely excited about this month. The WWU Symphony Orchestra will be performing Miles Davis’s Sketches of Spain on Feb. 12 at the PAC. You can read about the conductor and some of the good stuff happening in the music department in the upcoming pages, but I wanted to say a special little something about this show. Sketches is one of my favorite Miles records. I’ve always found it, well, magical… It’s beautiful and felt like such a brilliant departure from a Miles record (which is always brilliant). Go check out this show, it’s going to be absolutely special.

THINGS THAT DON’T MAKE ME HAPPY

I knew this day would come eventually, but was sad when I finally got the official press release. Polecat have called it a day. They’re playing a going away mini tour in early March, hitting Bend, Portland, Seattle and finally, Bellingham. Be there the last time to see them live in Bellingham at the Circus Guild on March 7 at 4 p.m. (all ages) and 8 p.m. (21+). Love them or like them, they’ve been a mainstay on the music scene for over a decade and always light the dance floor on fire. Polecat is another example of how if you work hard, you can make a living in the music business – tour, grow, build and be good. Congrats to all of you, and thank you for your work in the music scene!

Was disappointed to read The Sheen have called it a day as Kellan appears to be splitting town (as the best often do). Before he splits, they’ll be playing another show at Karate Church on Feb. 7 with Careen, Wild Powwers, and Bastard Salt. The Sheen aren’t necessarily officially calling it a day, they’re just probably not going to play anymore. Hopefully the remaining members will go on to make good and equally weird music.

I’m pretty sure I had a lot more le beat stuff saved, but as my computer got veryyyyyy sick last month, I lost a lot of info. If I missed something, please resend it. If you have a new record coming out, please submit it… if you just want to say hello, send an email and I’ll say hi back. See you next month.