Lonely Together: Duo makes music in sound and soul 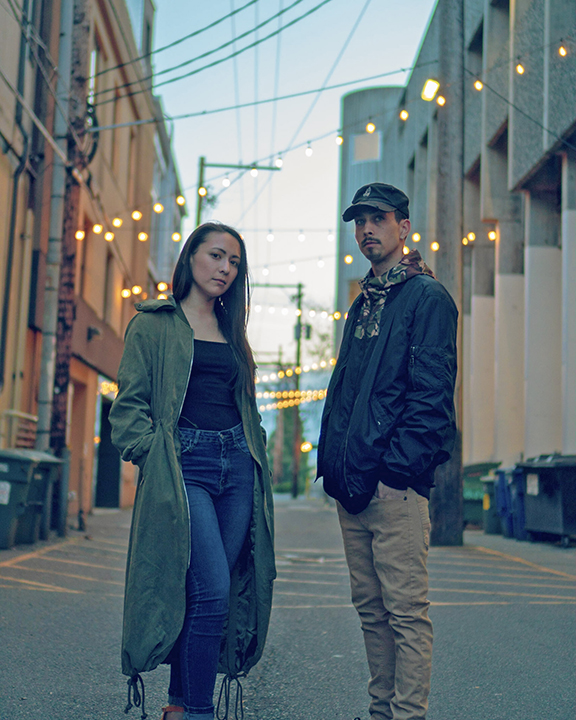 Sometimes you just never know where love will take you. For Rosalie Matsumoto and Zach Cook, love brought them together and led to the creation of Lonely Together, an electronic hip-hop music band in Bellingham.

Though they were a couple for a few years prior, Lonely Together officially had their start in 2018. Zach spent time in other bands, while Rosie grew up playing music.

“(In college) I met Zach, who was writing music and working with other producers at the time. Eventually when he began teaching himself how to produce, I wanted to be a part of the process and I also learned how to produce Hip-Hop, R&B, and Electronic music. We realized with our varying musical interests and backgrounds, we have great chemistry and decided to start making music as a duo,” stated Rosie.

She added, “We realized we had something unique in our music and thought we could do more than just producing for other artists. Through self-taught trial and error, we developed our own sound and fell in love with making music together, and thus came Lonely Together.”

In 2019 the band released their debut EP, Neverlost, and have continued to release sings, usually accompanied by a video. The EP versus single song release is less of a strategy and more of a means to see what their fan base prefers along with what sounds work better than others.

“Being relatively new to the music scene, we are trying to figure out what sounds our fans like the most,” stated Rosie, adding, “(In) 2020 we are focusing on being consistent and dialing in our sound.” The goal for the band is to release a full length but in the mean time, they’ll continue to release a single every month or so.

For their live shows, the band has just added guitarist Riggs Mischke on electronic guitar to help fill out the sound, stated Zach. “Riggs just started performing with us in 2020, so re-developing our live set with him has been a fun learning process.”

Musically, Lonely Together think of themselves as pop/hip-hop, but with electronic, R & B and alternative rock influences. “Both of us have very diverse tastes in music which allows us to draw inspiration from a lot of artists and genres,” Zach stated.

While the two create music together, Zach has continued his solo project, SAFE TRVLS. “I knew that when we started LT I would still want to release my solo music. Lonely Together is music that I would personally never be able to make because Rosie pushes me in directions and ways that I can’t do on my own or would choose not to,” Zach saod. He added, “Although my sound is similar to LT’s as a whole, I think that my music has a darker sound to it, and my style tends to stay closer to Hip-Hop and Alternative R&B.”

Overall, Lonely Together couldn’t be happier with how the project has turned out, both personally and how the reception has been so far.

“I’ve personally been making and releasing music for about a decade and have never been able to get any momentum building until we started releasing music as Lonely Together. It really feels like something that people are excited to support and that’s a really cool feeling,” he said.

Rosie added, “For me, the feedback has been amazing and humbling. I never imagined where we’d be at this point, considering Zach and I just started collaborating together on music barely two years ago. We love and appreciate our fans and can feel the momentum starting to build.”