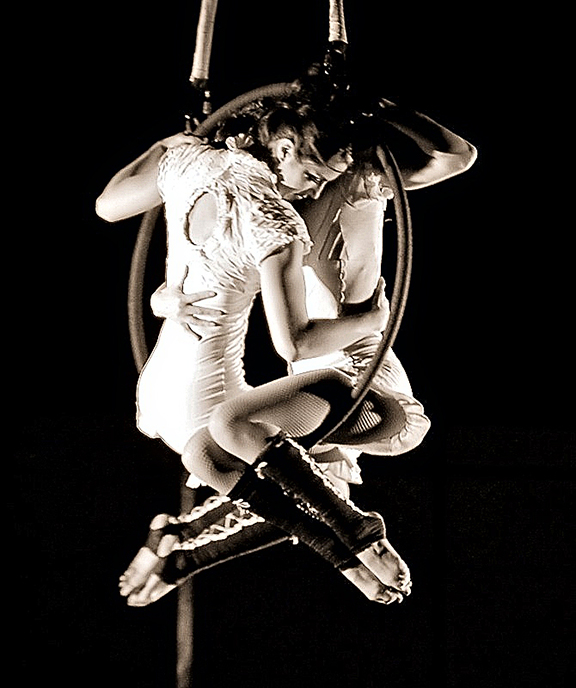 In the early days of the Bellingham Circus Guild, Anneka Deacon had an idea for a Valentine’s Day event.  This was an ambitious proposal to her colleagues as it was mid-January of 2010, so there was hardly any time to promote, let alone put together, an entirely new performance. Despite the time crunch, Deacon successfully orchestrated the Guild’s first Valentine show. This year, “My Circus Valentine” is celebrating its 10th anniversary with seven different showings from Feb. 13-17, making it the longest-running curated circus show from the Bellingham Circus Guild.

“It was ramshackle, raw, beautiful, and we absolutely packed the house,” Deacon said, describing that first performance. “We pulled it off by the skin of our teeth. It was a wild ride, but we liked it. And it turned out that the good people of Bellingham were looking for something different, beautiful, inspiring, warm and fuzzy to do during that soul-flattening grey time when it seems like winter will never end.”

As the Circus Guild has grown and evolved over the past decade, My Circus Valentine has changed too, Deacon explained.  “The event has grown from a ramshackle, hastily thrown-together, no-budget show into a grand production that showcases the professional, polished, high-skilled side of what our circus community can do.”

The event has developed from a single show to a full weekend of special guests and a wide range of acts, some of whom were previous mentors and allies when the members of the Guild were beginning their circus careers. Every year, the show offers something novel and fresh, growing from its previous renditions and gaining further community support and admiration. This year’s event will feature several new experimental acts, which remain a secret until their premier.

From the genesis of My Circus Valentine, Deacon knew it would take a village to pull it off.  This year, the production team has over a dozen core members, accompanied by 40-60 volunteers. They rely on local business sponsorships to make the event happen, as ticket affordability is something the Guild wants to keep consistent for the Bellingham community.

Guild member Dream Frohe began as Deacon’s aerial performance partner and has been one of her primary collaborators from the beginning, serving as an active participant in the creative process. This year’s Artistic Direction team includes Deacon, Frohe and PJ Perry. Deacon now serves as artistic director, technical director, stage manager and executive producer.

“I do my very best to curate a well-rounded show with a variety of circus arts represented, and to feature the finest local acts as well as a few world-class guest artists from afar,” Deacon said. “This year’s shows will include juggling, clowning, object manipulation, acrobatic dance and a variety of aerial acts.”

Hosting a show series of this magnitude is no easy task, especially when much of the planning and communication occurs during the holiday season of November through December.  Deacon has developed strategies for leaping this hurtle over the past 10 years, like setting act submission deadlines appropriately and meeting with the production team in the fall.

“There are also fiscal challenges,” Deacon said.  “The priority of the show has always been to pay artists a fair wage for their incredibly hard work, and in the early years we all just barely scraped by. As the event has grown, we have begun to do a better job of meeting our goal of paying artists a decent wage, and now I have a new goal: to acquire fiscal sponsorship so we can also pay our production team members a fair wage for their hard work while continuing to keep our ticket prices affordable.”

Despite the challenges, Deacon expressed how fulfilling her work is.  My Circus Valentine provides a needed service to the community for a holiday that conjures a wide range of complicated feelings.  The event offers a space for people of all relationship statuses, sexualities, feelings towards love and all types of late-winter blues to experience something eccentric and beautiful as a community.

“The very first Valentine show was profound because of the way it surprised me – how it ended up being so much more than the sum of its parts, and the glow that enveloped everyone afterwards felt like a bigger kind of love- a community-scale love,” Deacon said. “Some of our curtain calls, especially in the last four years, have felt that way for me. I always want to make our curtain calls special, because how we invite guests in at the beginning of the show and how we release everyone at the end is so important. It creates a container and a frame for the whole experience.”

As for the future of My Circus Valentine, Deacon has a few ideas.  She’s considered doing mini-tours throughout the Pacific Northwest to share the experience with new audiences, but also likes the idea of going back to smaller, more intimate performances. For now, she said, the process proceeds ‘one foot in front of the other.’

“I always want to foster these kinds of moments of grace, but they are not something that can be forced,” Deacon said. “There is some kind of magic that we simply must make space for. We bring all the right elements together, and in the alchemy of each show we just hope those moments of grace find us in the spaces we make.”