NO WIN: Living an ode to punk 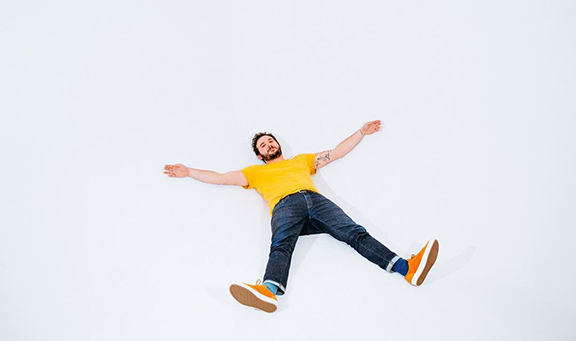 Danny Nogueiras is always dabbling in music one way or another. In the past he ran a record label in southern California, worked at and owned recording studios in the Bay Area, and played drums in party band FIDLAR. Currently, Danny likes to work with bands at his Los Angeles studio, Balboa Recording Studio, and play in his own band NO WIN.

Danny likes to have his hands busy, which is why it’s no surprise that he dove into a solo project titled NO WIN in 2015 amongst all the other music madness. Releasing demos just for fun, NO WIN wasn’t a serious endeavor at first. Over the years, Danny expanded the band with bassist David Jerkovich, drummer Jeff Enzor, and lead guitarist Juan Linan, got signed to Dangerbird Records, and released their first record as a band in 2019.

NO WIN’s debut record, Downey, is an ode to identity, an appreciation for the place Danny came from and a love letter to his upbringing.

Downey, CA is a suburb of Los Angeles where Danny grew up. He liked that the businesses were not corporate, but a real piece of tangible identity for the small town. The record was meant to reflect where he’s from, who he wants to be, and the good and band of the past.

“Downey is my home, that’s where I came from and where I learned who I was,” Danny said.

Growing up in Downey introduced Danny to pop-punk bands like Blink-182, Green Day, and Bad Religion. Friends of Danny’s (often musicians) showed him numerous punk rock and indie bands like Buzzcocks, Elliott Smith, The Attics, and Bright Eyes. He recalled grabbing onto any artist he liked and devouring their entire world.

“It was a nonstop want to consume as much music as possible,” Danny said.

While talking about his debut album, Danny brought up honesty with himself and the record.

“Music has been a path of self-discovery, when making this album I felt confident and comfortable in what I was doing.”

This ease of self-expression didn’t happen for Danny overnight. As a musician who had “been around the block” he felt that this familiarity with his musical identity came from age and an abundance of studio work.

“Studio work teaches a lot and is a privilege. You get to be in a room with bands (including your own) and treat recording a project sacredly.”

Danny recalled how the process of making the record was purely exciting.

“Everyone’s mentality was ‘let’s have fun, make stuff that gets us excited, and push each other to be better.’”

With support from Dangerbird records and collaboration with esteemed producer John Goodmanson – who has worked with artists like Bikini Kill, Death Cab for Cutie, and Wu-Tang Clan – the album has achieved a sonically honorable sound.

NO WIN is currently gearing up for a tour through the West Coast where they will be making stops in Bellingham and Seattle. The band also plans to have a few local shows in Los Angeles, and if all goes as planned be back in the studio by mid-March to track their second record.

See NO WIN live at The Shakedown on Feb. 27 with Bobby Petite and Cat Valley. Check out NO WIN’S Facebook and Instagram pages and listen on Bandcamp, Spotify, Apple Music.