Sketches of Spain: An exciting jazz and symphony collaboration with the Western Washington Symphony Orchestra 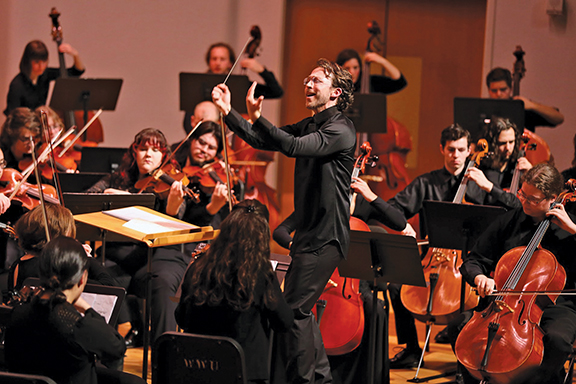 There is something very special about sharing a stage with other people to make music. There is something spectacular when the stage holds 60 to 70 people and one conductor. And, when the beauty of orchestral music meets jazz, something unique happens. Miles Davis and Gil Evans’ Sketches of Spain is coming to Bellingham, thanks to a collaboration between Western Washington University professors Dr. Ryan Dudenbostel and Kevin Woods and Fairhaven student Sage Romey.

I met with the university’s director of orchestral studies, Dr. Dudenbostel, and chatted over coffee during Bellingham’s annual yet irregularly scheduled snow storm. “We do a combination of classical and contemporary music, opera, musical theater and always at least one children’s program every year,” Dudenbostel said in reference to the WWU’s flagship symphony orchestra. “I’m really proud of the culture of the group and the community audience that has grown around it.”

As the conductor and director of the Western Washington University’s two orchestras for six years, Dudenbostel has helped shape the culture of orchestral music within the university, which accounts for a big chunk of Bellingham’s population. “This orchestra is a really important part of the musical constellation within Bellingham,” he said. “We have the Bellingham Festival of Music, the Bellingham Symphony Orchestra, the Marrowstone Music Festival in the summer, then the Western Symphony Orchestra.” That impact is felt throughout Bellingham, whether it be a concert series at Whatcom Museum called Off the Hill or other off-campus events.

If you thought classical, or concert music was just for older people, think again. “We have a younger audience, who aren’t students. That owes a lot to the efforts we make to make our concerts relatable, accessible and not intimidating to audiences who aren’t familiar with classical music,” Dudenbostel said. “We want the music to be for everyone. Most of our concerts are free, except for this one.”

This concert is ticketed to fund a planned concert tour of Prague and Vienna in June 2020, an experience that proves key to a young musician’s experience and education. “For musicians to be able to perform abroad, to be performing in the places where so many of the pieces we play were written, and to be able to understand that culture even for a little bit is a great education.” For these musicians, class isn’t just about playing music, it’s about the history and culture that follows every piece they play.

Here in the US, jazz music is a genre that holds a deep-rooted and important place in everyday life. Sketches of Spain is an interesting, rich of blend American jazz and Spanish flamenco, a piece unique in its sound yet still wholly American.

Sage Romey, a senior at the Fairhaven school, is another key component to this collaborative performance. “A year ago, I approached Dudenbostel asking if there was any way we could do a performance that combined the jazz department and the symphony,” Romey said.

With the assistance of Kevin Woods, director of jazz studies, and Dr. Dudenbostel, Romey decided amongst several other pieces that Davis’ Sketches of Spain was the perfect choice to combine the two mediums and provide a unique platform for her senior project. (Romey holds a Fairhaven concentration in ethnomusicology; the study of music of different cultures, especially non-Western.)

Sketches of Spain was recorded in 1959-1960 and uniquely blends classical and jazz music while also providing “a really complex and thought provoking combination of identity politics, migration and nationalism,” Romey said. “The pieces in Sketches [use] this concept called Duende, which is really hard to define succinctly but is a raw, emotional character that can only come through if there is the possibility of absolute failure and death.”

The hard part about performing huge, complex pieces? “The scores are not published,” Dudenbostel said. Romey would go on to do “the serious digging required to find them” and acquired only the scores from Gil Evans’ estate, meaning the parts had to be made based off of the score (a seriously tedious and painstaking process). Joaquin Rodrigo’s Concierto de Aranjuez and a piece from Manuel de Falla’s ballet El amor brujo will be interwoven throughout the album’s performance, which is where the orchestra comes in.

Bellingham’s tight-knit yet diverse music scene wouldn’t be what it is without Western Washington University’s music department. Many of the students are in local bands, play gigs around town or busk at the farmers market on weekends. Some of them even write for What’s Up! magazine. With the university accounting for a large chunk of Bellingham’s population, there’s only good reason to support your fellow neighbors by catching their performance of Sketches of Spain. This unique collaboration between professor and student may be one of your few opportunities to see it live and the ticket costs go towards continuing to diversify Bellingham’s unique music scene.

Join the Western Washington Symphony Orchestra for a performance of the cornerstone Miles Davis/Gil Evans album Sketches of Spain alongside the original masterworks by Rodrigo and Falla on which it is based, on Wednesday, Feb. 12 at WWU Performing Arts Center 155 – Concert Hall starting at 8 p.m. This is a ticketed event, with proceeds going to support the WWU Symphony Orchestra’s 2020 European Tour. See https://cfpa.wwu.edu/event/wwu-symphony-orchestra-presents-sketches-spain for a link to tickets.