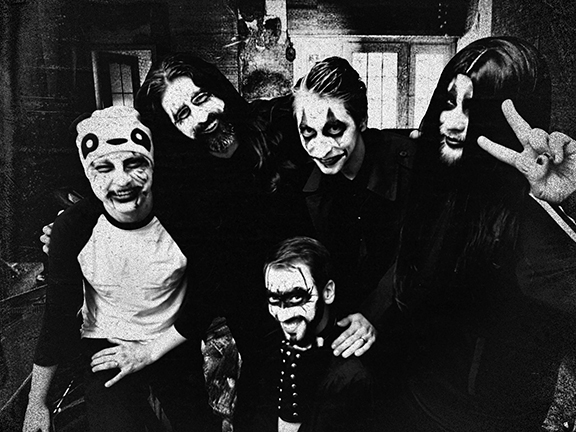 Meyer, who has played in a number of bands in the area, was playing an Alternative Library show in July 2018 with his former band, MARV, when he first came together with Cramer and Stainback of the Illogicians. Both parties had been familiar with the other and were each secretly seeking to create a new project together, Meyer and Cramer said in an interview last month.

Together, the force of these five musicians is nearly nameless, in a good way. The combination of a wide range of inspirations births what Meyer referred to as a “frantic collage approach” to their creative process.

“There’s a lot of ammunition allowed to us when we’re working on a song and can go unrestricted into any unfamiliar place musically and feel comfortable and confident in doing so,” Meyer said. “Being open and having no rules in the compositions means one person brings an idea and the rest of us might not understand it but are willing to drive it and try to make it work.”

The result of this process is a sound equal parts anything you can think of. The point being that this collage rock has the option to resemble a disparate element of any genre and really tear it from the page it existed on and paste it on another, Meyer and Cramer agreed.

Their first album, Recorded Instruments, was released last month and is the outcome of a year of recording and production for the band. Cramer has a studio in his backyard where they put the album together, something the band agrees is an essential aspect allowing them to maintain all of the creative control for this project.

The recording process is an especially detail-oriented and timely one with each song being so sonically different within itself and within the realm of the rest of the album.

“All of the songs take a lot of time and require completely different recording techniques,” Cramer said. “I produced everything in 10-second intervals because each song requires a vigorous process with different tones for each genre within each song.”

Recorded Instruments makes smart use of this jump-cut, genre-hopping approach and includes elements of metal, psych-rock, jazz, and a number of other genres all stirred mindfully into a work that is intriguing at its core.

Under the Spine Readers’ banner are three elements central to their mission as a Bellingham outfit.

The first being their live performances. “Subheadings of this category include deliberate vivid rendering of all compositions at the highest level of detail possible as a special presentation each Halloween at Gruff Brewing. Auxiliary performers are called upon augmenting the usual band as necessary to represent any instrumentation from the album typically omitted for casual shows,” Meyer said.

The second of these elements is their studio recordings as an effort to capture a document of each group composition in the most elaborate detail they deem appropriate for future listening, Meyer said. This includes their use of Cramer’s home studio as a tool central to their desire to be fully produced and dispersed under their complete creative care.

The final aspect to their three-pronged mission involves creating spontaneous music and pairing it with visuals for online presentation, Meyer said. “We’ve titled this element Spine Readers Digest, and release episodes (we refer to as “issues”) as intervallic installments on our YouTube channel. Each episode features a unique stream of conscious improvised musical performance… alongside a video art companion piece we create as a reaction to the music using vhs tape sources and a blend of analog video equipment wired as feedback loops of undulating shape, texture and color…”