Apology Wars: The way to go 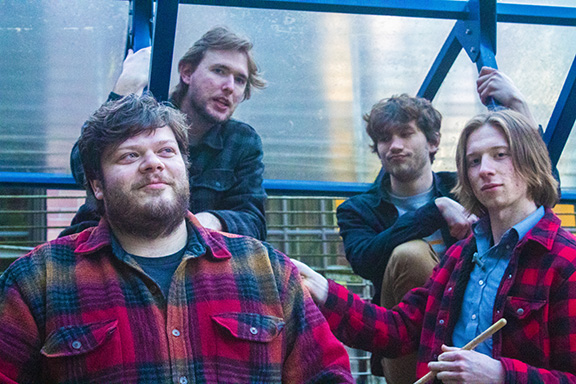 Bellingham’s Apology Wars make their own rules when it comes to their creative process—and also break them. A group of goofy and lighthearted guys who have fun while working together, they become one hell of a powerhouse when merging ideas together.

The indie-rock band is made up of Kyle McAllister (vocals), Ryan Rodgers (guitar), Bryce Hamm (bass), and Asa Morris (drums). They have found their own way of growing the project, whether that is bringing songs that have been in their head to life on the spot or using humor as the ultimate networking secret weapon at live shows. Their debut EP, The Best I Can Do Is Ruin A Party, was the result of squeezing into a small room and playing Smash Bros until becoming delirious.

Since the release of their EP in August 2019, Apology Wars have begun the next step of moving beyond Whatcom. They’ve accepted opportunities that will expand their reach to the Seattle music scene, including being played on KEXP and recording two singles this month with Grammy-Award winning (and architect of the Seattle Sound) producer Jack Endino.

For Apology Wars, their EP displays a perfect example of what they can do – the band crafts a sound so catchy that it can make even the shyest of dancers tap their foot. Yet, this ain’t a project just for fun and kicks. The lyrics and instrumentals hit deeper in the mind and embracing all the beauty and grit that comes with the human experience.

Though Apology Wars’ sound has this way of producing a lucid and harmonious unison of vocals, strings, and drums, their music is anything but soft. There is a subtle heaviness that isn’t the forefront of its vibe but stands out in its own way.

The singles being recorded with Endino definitely lay it on heavy. These sounds are going to be louder and have a bit of a blues feel mixed in while staying true to their alternative roots. The lyrics are touching on some heftier topics related to mental health. “Better” is a defiant, mental health anthem responding to the common dialogue and stigma around depression and other forms of disorders.

Apology Wars are still very much a live band, and now more confident about performing because they’ve gained a new understanding of working together during the recording process.

“You’ll try to play a part you’ve played a million times and it feels foreign because it’s a different pace than what you’d naturally do. You’re also watching everyone else do their takes and starting to notice how they play during parts you never paid attention to before,” Hamm said. “I watched Asa’s takes on drums over and over again. At the time, I was more focused on my bass parts during practice but after watching his takes over and over again I noticed what he kept doing.”

Hamm added that he noticed where Asa would do his fills and where he’d do the bass drums. “This made me think about the bass lines and changing some stuff up. Recording just polishes everybody up and forces you to think how your band mates think because of how much you have to watch them work—it’s awesome.”

For Apology Wars, this project isn’t just about making music. The four members are the right people to productively work creatively with. The band has found their flow with utilizing their differing skill sets in a way that works for them.

For example, Rodgers will have an idea that will be stuck in his head until he brings it to McAllister, Hamm, and Morris, who then all make a song together. For McAllister, song writing for lyrics had always been a very introspective process until collaborating with Rodgers, Hamm, and Morris.

“For so many years I used to write songs just by myself. Writing a song is very personal because you’re literally bringing it out of your mind and into the world with your instrument. It can be hard to take criticism sometimes but with these people, I find it very easy to work with them. When you have a good mix of creative people, it’s a really fun process,” Rogers  said.

Making music is a lot of trial and error and finding the right combination of people to be able to experience that with is essential. Apology Wars has grown with this project, and given the members the opportunities to teach and learn from each other to thrive as artists.

Come see Apology Wars in action on March 6 at the Piano Room for the Make.Shift Art Walk starting at 6 p.m. See their Facebook page for updates or https://apologywars.com.