Beautiful Freaks: Music to the people 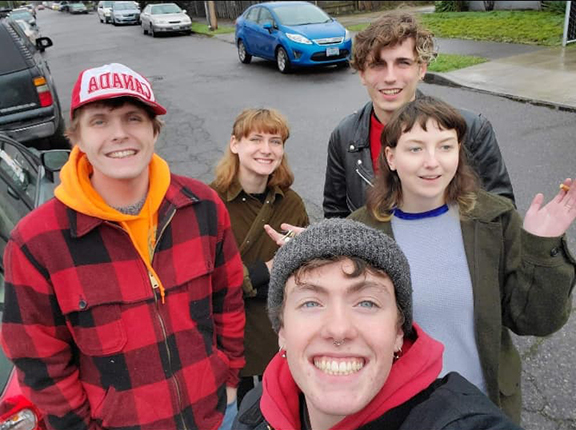 We have all heard the horror stories of DIY tours. Gear has been stolen, band ending fights have ended, and oh god the car troubles. Sometimes it seems like it is just an inevitable rite of passage for every band who hits the road. Now the Freaks are no stranger to chaos, but we can only handle so much. Preferably we’d like to keep it onstage. But we are a band on a mission, and the next step was to bring our music to the kind people of Pacific northwest. On guitarist and fearless manager Yammy pulled in all the calvary to make this happen, and the prep work showed the entire time. We (mostly) had lodging, a full budget, a complete plan, and intensive meal prep. The team had never been in finer form; we were beyond well oiled. This wasn’t just with travel either, I mean musically as well.

A line-up like this is special. Though as the tour approached our five piece line-up, James “Yammy” Bonaci on guitar and vocals, Meg Hall on vocals and keys, Montanna Siddle on bass, Graham Wallwork on guitar, and myself on drums, became the longest lasting line-up, and the sound showed it. Our songs have been more reflective of ourselves, and our playing has tightened and began to grow with each other. Every night of the tour we could feel that connection.

We did have some challenges upfront. We were booked and incredibly excited to play at the Underground Coffee House, but snow led to staffing issues and had to cancel. Nonetheless, the next day we might up at the rehearsal space, and crammed our two small cars full of gear. Anyone who has been to a Beautiful Freaks show can attest, we make a lot of noise, and that means a lot of gear. It was a tight squeeze, but we carved our cozy homes for the long weekend. I found myself in the backseat of the rhythm section car, shoulder to shoulder with our designated beater kit, “The Horse.” Rolling with two cars was not an ideal situation, but an effort was made to stick together, for us freakers could no longer cram in yams now dead Red “Vulva” Turbo Wagon (RIP 1996-2020). Headed down to Seattle, we were pumped to play the one… the only… TACOMA DOME… Wallingford Annex. It was fantastic, we made our way to the Tacoma Dome, an amazing house show venue run by members of Plum & Black Ends. The whole crowd itself was all friendly faces from the Seattle music scene. With Medijin and Rachel’s Children on the bill the room was captivated every minute. Passing a conceptual and physical joint with Maya, Alaia, Nicole and the rest of the crowd during Rachel’s Children’s set was a massive highlight of the tour. Drew from Dirty Dirty put us up for the night. If you haven’t met Drew before, they are one of the kindness AND heaviest hitting drummers in the PNW. The next morning we settled in for the longest drive, the leg down to Portland. Now we say this understanding this was the mini-est of mini tours. We luckily landed a double header in Portland heading to the Waypost for an early all ager rager with Pulling it Off. The Waypost was a cozy venue with some of the nicest management we have worked with, a big shout out to Cactus Flower Booking! Playing this show left us feeling energized and warmly welcomed to the PDX. We headed to the Tender Leaf House next and the other end of town. This show was packed with some true PDX Punks GUNK, Slippery Eyes & B.R.U.C.E. Sharpsteen Studios shot all the sets in glorious 4k, our new song Swiss Family Manson came across heavy and dirty on camera and we highly suggest you check it out. Gunk had all the doom that you could want turned up to 11, and Slippery Eyes had that tight emo and post rock sound that we honestly miss these days in Bellingham, not made by four white dudes too which is a plus! We don’t think our set would have been so great without B.R.U.C.E setting the stage. If you haven’t seen them, they RAGE on stage, with Anna getting up in your face you can’t help but become full enmeshed in their breakdowns. They really followed through on their FB description, come for the german nü metal stay for the nazi stomping and Be Really Unnecessarily Caring and Emotionally supportive. Ryan helped us out at night with a place to stay which we appreciated to no end.

After getting a classic Denny’s experience, punks, seniors, heroin needles and some dude trying to sell us a straight razor in the parking lot we headed to Olympia. Andy of CapCity Presents really went the full distance to help this end of the tour. We spent a good day in Olympia and spent a good chunk at the classic venue Le Voyer. At this point we were fully in tour mode, it was fun and refreshing to be stopping around towns in PNW, because we truly do feel connected and at home in this area of evergreen. The show was a blast and funny enough was followed up by a K Records Release show, which was a fun small word moment! A late night drive to Bremerton ended up with a wholesome time with our former bassist Dylan Hall and the band in Meg and Dylans childhood treehouse. We spent our last day in Bremerton. For any of you Bremerton, Silverdale, Poulsbo or Kingston kids, you know…you just kinda hang. It was honestly a really relieving way to end out. Jacob of Surrender the Crown Productions helped us keep our Chuck show from falling through despite a band bailing last minute by making it free. It was a wholesome show of good drinks and honestly the coolest, most apt venue for freaks to play. We spent the night in Poulsbo and made the move home the next day with time to spare in the afternoon.

It’s hard to put into words how much this little run of shows meant to us. We put our hearts earnestly into our music and our shows. Anytime we can entertain anyone at all with what we do we are happy. Every stop on tour meet new people we could meet, new friends to share music with. This type of touring isn’t about making money. It isn’t about partying hard. It’s just about connecting with people through music. Thank you to everyone who came to any of our shows on tour, or to any show ever. Thank you to all our hosts, and every band we played with. Thank you to every bar, and every house share. Thank you What’s Up, and thank you for reading. We will be planning many more mini tours to an area near you…but also keep your ears open…. We are working on a very ambitious album and tour to go with it!