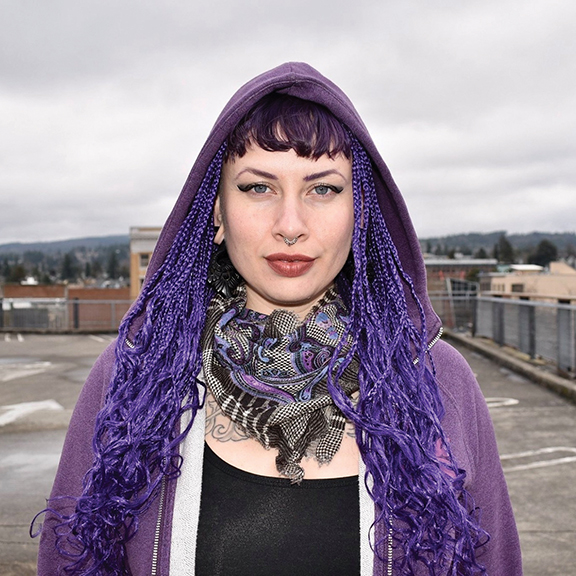 DJ Anastasia Lotus, known by her stage name Lotus Drops, describes her DJ genre as “goddess womp” and dubstep. Goddess womp, she noted, incorporates primordial female vocals with dark, strange flavors. Having found a niche sound that captivates her audiences, her performance genre hasn’t changed much. She has, however, transitioned from breakbeat-influenced world electronica to more dubstep influence, and begun incorporating elements of trap music.

After developing her career in San Francisco and beyond over the past decade, Lotus returned to Bellingham for several years.  She’s now beginning her next chapter as a mother and DJ – recently moving to Olympia –while keeping a close connection with the Bellingham music scene and moving forward with her ambitions.

“My mixes and flow have become way more refined, and I’ve learned to tell a story with my sets,” Lotus said. “Most people say that they tend to get transported to another dimension during my performances! I love the feeling of assisting people in transforming through electronic music. It’s always a cleansing and revitalizing experience for myself and the audience. “

Playing live sets that are completely dependent on technology can be a challenge, Lotus explained. She plays on CDJs, which she says is becoming an old school tool, and mixes her performances live, an homage to turntable roots.

“I have played on Ableton in the past, but the rawness and unpredictability of mixing on CDJs is way more of a thrill,” she said.

Lotus discovered her dream to become a DJ when she was 13 and began attending all-ages dance parties in Bellingham called “Barefoot Boogies.” She began volunteering, embedding herself in the community it offered.

“I was always fascinated with the energy the DJ holds at a party, and how much of an opportunity you have to share music that moves you,” Lotus said. “I hung out with all the DJs and luckily a few of them let me play around on their records and turntables.”

Lotus specifically credits two DJs at the time – Shawn “Mr. Pickles” and Brandon Brodie – for giving her the chance to explore DJing and ignite her passion for the craft.

When Lotus was 20, she moved to San Francisco and expanded her reach.  She performed her first DJ gig there at a sold-out show and began using the moniker Lotus Drops. From that moment in 2008, she started playing multiple shows a week for several years.  She joined DJ crews Ritual Dubstep and MalLabel, heavily immersing herself into the heart of the San Francisco underground electronic music scene and growing a fan base. She has also performed six separate DJ sets at Burning Man, embedding herself into that community.

Since returning to Bellingham, Lotus has been balancing raising her son, Orion, and jumping back into performing and finding her place in the community again.  She has family and friends that help take care of Orion when she performs, which she is grateful for.

“Last year was a huge turning point back into the (Bellingham) scene,” Lotus said.  “I focused really hard on rebuilding momentum up here in the Northwest. I left pursuing my DJ career 10 years earlier and I was back feeling more inspired than ever. Luckily with the steady bookings with Zack over at Wild Buffalo and my new residency with People Music, I was able to reestablish myself as a local DJ and rekindle my fan base. That’s the beauty of coming back to your hometown though, you get to reconnect and synergize with old homies and find new connections that want to make big dreams happen. Those vibes are what I thrive in as a DJ.”

In the past three years, Lotus has been learning about sound healing practices, and has thrown small events to slowly reestablish herself in Bellingham. She’s retained a core following that have supported her throughout her career which she said she is thankful for.

“The Bellingham scene has changed a little but honestly, there’s a certain magic that has always been here for me,” Lotus said. “I’m just starting to get to know the new kids around here and luckily we have awesome cats like Metanoia Collective providing incredible underground vibes and parties.”

While Lotus Drops considers Bellingham her home, she recently moved to Olympia after being offered a housing situation she couldn’t pass up, making her love affair with Bellingham a long distance one for now.

“Even though I’m tucked away in Olympia making art and raising my son, my heart is still fully active in the Bellingham community,” she stated, regularly returning to the local music scene.

Lotus Drops performs at the Bellingham Dance Company on March 14 as part of a fundraiser for Domestic Violence and Sexual Assault Service (DVSAS). For more information, see the Facebook event. Find Lotus Drops on Soundcloud at soundcloud.com/lotusdrops, and for upcoming events and news updates, find her on Facebook @LotusDropsWomp and on Instagram @lotus_drops.