Voluptuous Panic: Pining for the stars 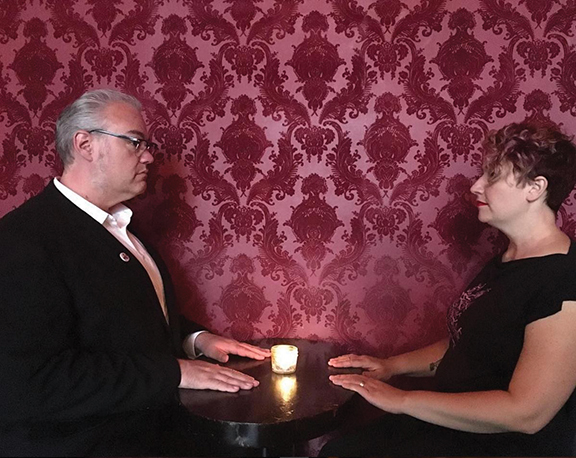 In the mild-mannered mood of the Pacific Northwest, it makes sense why so many bands from the area, in some way or another, embody the sense of bittersweet melancholia that is pervasive in both the scenery and its inhabitants. Voluptuous Panic lives up to its own name and current locale with tunes that are home-crafted, chilly, and pining, but also cozy and engulfing.

This duo consists of Gretchen DeVault, songwriter/guitarist of indie sweetheart The Icicles, and Brian J. Bowe, reformed rocker and part of John Sinclair’s Blues Scholars group, and a professor at Western Washington University.

The duo first started when they collaborated during the film, The Death of an Imam, a documentary that examines the way the media frames and covers the FBI shooting of Imam Luqman Ameen Abdullah. There they worked on the soundtrack, and took stock of each other’s musical inventory. Fast-forward to 2013 where things are heavily underway between them and Voluptuous Panic is decided as the alias for the project: a name that provokes psychological subtext, but in a controlled, sensual manner.

How they ended up with their current sound is surprising, however, as both come from somewhat different worlds.

Brian is an old school punk from Detroit, forming his band Squarefoot, where he played bass. “When I think of that time, I think of seeing bands like Dinosaur Jr and My Bloody Valentine, and going to warehouse raves, going to music festivals in Morocco. I find myself very susceptible to ecstatic states when I’m encountering very loud, kind of repetitive music. Especially in 92, it was about this immersion in sound.”

Gretchen grew up around a piano and has fond memories of conjuring up music as a kid. “I briefly had piano lessons when I was about five or six. I always regretted not continuing with them. Many of my cousins continued with piano and I would ask them to teach me songs they had learned… In college I took a guitar class… I kept at the guitar and eventually was able to change chords reasonably. The day I was able to change chords somewhat smoothly was the day I wrote my first official song. After that, I joined my first band and haven’t stopped playing ever since.”

The band’s songwriting process differs considerably from their previous efforts. Because of the physical distance between them – Gretchen lives in LA and Brian locally – much of the songwriting is done in an additive manner over email. Gretchen will email Brian a demo recording, he will add onto that, and eventually they end up sending these overdubs to their buddy Tony Hamera who mixes them into one cohesive sound-world. This keeps the process very democratic, and lets each other explore their own voice, while being able to subtly add their own.

“During the first phase, I let the song come out on paper (and via guitar chords or on piano) without judgement or censoring. I basically give myself permission to write whatever, even if it ends up being garbage,” Gretchen noted. “I know that I can always throw it out if I don’t like it or edit it later. But I think it’s important to start with that open space first. The second phase is the editing phase. That’s where I take a real look at the song — make my edits or determine if it’s even worth further exploring the song. I use my phone for rough recordings during both phases so I don’t forget the ideas that come up.”

For what they both bring to the project, Brian said, “We’re both very sensitive people, and aesthetics are very important to us.”

Gretchen added, “I really enjoy the texture and atmosphere that synths can bring, so usually that’s where the synth comes in for me. I’m usually adding synth as texture to a song.”

Whatever gap in the song is formed by its inherent creation by one person, it seems like the other is able to fill it with an apt sound that keeps the ball rolling.

Their presence in the music world has been limited, with a handful of delightful singles released in the past decade, but both express desires to get together in the same studio and record a handful of tracks to try and shake the formula up even further. If that were to happen, it also sounds like some live performances would also be in order.

To hear Voluptuous Panic, check out voluptuouspanic.bandcamp.com or visit their Facebook page at facebook.com/voluptuouspanicmusic/.